The meteoric rise of Patrick Mele, which is mainly due to his bold way of using colour, has definitely made him a designer to watch closely. 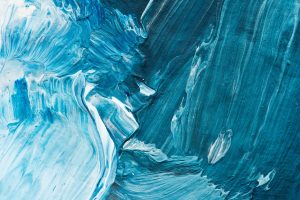 Mele says that he isn’t afraid of colour. He likes to make bold statements using colour and especially loves rich hues. He doesn’t tend to work much in tertiary or muted colours and instead likes crisp black, white, and vibrant colours for making an overall statement.

So how does Mele do it? We were able to get a sneak peek at one of Patrick’s recent designs and asked him to discuss his colour selections, room by room, which resulted in lessons starting to flow in.

The home’s entryway, at first glance, looks to be a complete riot of colour. However, after speaking with Mele, you realise that actually, he was working with a very tight palette. Mele says, first of all, I wanted to have lots of white, and then a mixture of orange and blue. His secret? Working with different hues within the two complementary colour families. His orange family includes grapefruits, tangerines, and corals. His blues included navy, Delft, turquoise, and cobalt. Not muted, but very rich hues.

2. White and Blue Works Every Time

For Mele, when he uses a combination of white and blue is like wearing blue jeans and a white shirt, or a white shirt and navy-blue blazer. They never go out of style. In interiors, this classic colour combination may be dressed down or up. Mele used a decisive denim-like blue grasscloth shade on the walls for adding texture and colour in the living room, and that helps the white accessories’ silhouettes, and also makes the wingback chairs truly pop. The decor’s overall effect is casual yet polished. Mele says that he thinks white and blue is the equivalent of white and black, but not quite as fierce. For most people, it is more welcoming.

3. Chose a Palette, and then Repeat the Process

When you work in a streamlined colour palette is helps for rooms to feel more cohesive and also helps to make the transitions between the rooms. Mele says, when you are in the centre of the foyer, you can see all of the other rooms, you can have the same colour families repeated yet in different ways in various spaces. Case in point: the breakfast room’s walls are coated using a similar blue colour as the family room but with paint this time. Like in the entryway, a splash of orange upholstery provides a grounding yet striking effect.

4. Play With the Percentages

One ingenious way of getting more mileage from a small group of colours is doing a kind of flip-flop, pushing what was used as the accent colour previously into the foreground. That is exactly what Mele did to a music room. He used statement tangerine lamps and orange curtains while allowing the white and blue to recede into one armchair. It ties in with the blue to fit in with the other parts of the home, Mele says about his design.

Mele is a big proponent of painting various things white, and furniture in particular. He says that thinks that white freshens and modernises. People tend to be afraid of the found furniture of their grandmother’s, but they have such fabulous forms and are timeless. White provides a contemporary personality to furniture and a youthful and fresh spirit, giving a lease of life that restoration company Abbey Group would be jealous of.

6. Striking a Pattern and Colour Compromise

When the pattern is dialled up, sometimes it best to dial the colour down to achieve a less chaotic, and calmer effect. When Mele was designing the master bedroom, he started out with a Matisse-esque bold pattern and made his colour choices. He says he wanted to use his pattern everywhere instead of breaking it up with various patterns and colors. So he refrained from introducing vibrant colours that he had used on the ground floor of the home. He says he wanted it to feel quieter, calmer, even though it is not a quiet, calm fabric.

When you are in a hospital, the thought of batteries is probably the last thing on your mind, yet without them, many of us would face a variety of barriers. Give a thought to all the equipment that … END_OF_DOCUMENT_TOKEN_TO_BE_REPLACED

The European Parliament was involved in the most contentious and biggest overhaul of copyright legislation in over 20 years. When these changes go into effect it will be by far the largest change in … END_OF_DOCUMENT_TOKEN_TO_BE_REPLACED

Special education is a line of work that requires a lot of training, patience and skill, but can offer a great deal of satisfaction and fulfilment for the right individual. By definition, special … END_OF_DOCUMENT_TOKEN_TO_BE_REPLACED