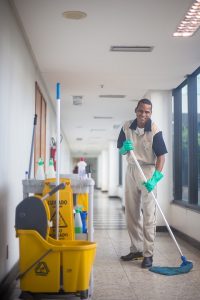 Cleaning cutbacks are meaning more dirty schools, and a teaching union is warning that these are now health risks for both staff and pupils. Union representatives from over 600 schools throughout Scotland participated in an online EIS survey. Roughly 4 in 5 said that their school had either lower quality cleaning or less frequent cleanings because of budget cuts over the last several years.

Over a hundred respondents claimed that their classrooms were definitely dirty, and some of them even used words like ‘disgusting’ or ‘filthy’. Even more said that either they or their teacher colleagues had wound up cleaning classrooms or other parts of their schools. There were 138 responses who raised concerns about hygiene and health in schools because of poor cleaning.

Cleaners Are Working More Than the Hours They Are Contracted for

Respondents emphasised that the deteriorating conditions were not the fault of the cleaners, but because of reductions in how much cleaning time they’re allowed per room. CJH Cleaning Services stated many cleaners are working past the hours they are contracted for so that they can keep the classrooms as clean as they should be.

The survey even found cleaners who had been given cheaper and less effective cleaning products. In some instances, they were even told to use water alone. Schools simply have to be cleaned properly and daily in order to make sure that both staff and pupils have an appropriate environment safe and conducive to teaching and learning. Cleaners have said they are allocated insufficient time for each room for them to clean them adequately. Some schools even report a lack of absence cover in terms of cleaning staff.

Reduced Quality and Frequency of Cleaning Services in Schools

The EIS report says that this survey provides clear evidence that over the last three years, school cleaning services have seen reductions in both quality and frequency.

The Health of Staff and Pupils Is Suffering

The survey illustrates how the health of staff and pupils seems to be suffering given the reduction of cleaning quality. A definite minority of the teaching staff now clean their very own classrooms due to the reduced cleaning quality. Surveys got sent to approximately 3,000 members, and there were 681 responses. The EIS claims this rate is ‘high’ and means that ‘meaningful conclusions’ are safely drawn.

Larry Flanagan, the EIS general secretary, says that the survey results make for stressful reading. Schools just have to get cleaned daily and properly in order to make sure that pupils and staff have an appropriate environment for teaching and learning. Cleaning service cuts have put a lot of burden on cleaning staff, and in many cases, it’s forced teachers to take charge of cleaning their classrooms. In other cases, it creates environments where disease and germs can rapidly spread, with significant repercussions for the overall health of staff and pupils. This can wind up leading to increases in absences among pupils and teachers alike, and that can have a detrimental impact on both teaching and learning as well as general well-being.

The Impact on Pupils of Cleaning Cutbacks

There have been recent incidents of major norovirus outbreaks and even infestations of rodents and insects into schools, which just goes to show what can happen when proper cleaning in our schools is cut back.

One spokesman for the Scottish Government says that local authorities need to make sure that they’re providing clean and safe environments for every school user.

Over the last decade, a nearly two-thirds reduction has happened in the proportion of those pupils getting educated in schools whose conditions are rated ‘bad’ or ‘poor’.

The global COVID-19 (Coronavirus) pandemic has been both advantageous and disadvantageous for the many corporations operating within the Milking Machine sector. Research published regarding the … END_OF_DOCUMENT_TOKEN_TO_BE_REPLACED

Bioconjugation: What Is It? It is a chemical technique that’s used to couple two different molecules together with one being a biomolecule like a protein, carbohydrate, or nucleic acid. Of these, … END_OF_DOCUMENT_TOKEN_TO_BE_REPLACED

If you would like your employees to value their training, consider giving them the chance to direct their personal and professional development. For instance, the Arts Council sent out a training … END_OF_DOCUMENT_TOKEN_TO_BE_REPLACED