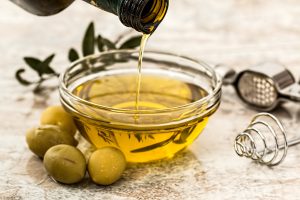 So you think you already know everything about the best cooking oil around? Well, it turns out that there are a few hidden secrets of olive oil inside the bottle. From properties that completely debunk the myth about oil being bad for your skin to the sordid history that the oil has with the Italian mafia, the following are several facts on olive oil that prove that it is much more than simply a tasty supplement for your salad dressings.

Extra-virgin olive oil is unrefined and is the highest quality of all olive oil grades. In order to meet the standards for extra-virgin, olive oil needs to be left untreated by heat or chemicals, which helps the olive oil retain its flavour. Extra-virgin olive oils also must contain no higher than one percent worth of oleic acid, and that contributes to its richer colour and stronger taste of this oil.

So what else is important for you to know about one of the top pantry staples? We have collected 10 facts on olive oil that will help you feel more informed about this amazing ingredient the next time you are in the oil aisle at your local grocery store and feeling a little stumped.

Although it is a myth that freezing olive oil tests whether it is real or not (many other oils are able to mimic olive oil’s freezing temperature), olive oil, in general, will freeze. However, the exact temperature depends on the levels of oleic acid that it contains.

The Most Olive Oil is Consumed By Greeks

Over 5 gallons of olive oil is consumed by Greeks per person per year on average. That’s a ton of olive oil and completely dwarfs the per capita consumption in the US of a little over one litre.

The term light oil doesn’t refer to the number of calories but instead the ratio of virgin olive oil versus refined olive oil. What gives the oil its distinct taste is extra-virgin oil.

Olive oil’s colour can slightly change over time since it oxidises. However, naturally, olive oil comes in a range of different colours from green to deep golden to pale yellow. The more chlorophyll contained in the oil, the greener that the product is going to be. Green oils have a tendency to contain higher amounts of antioxidants and an intense peppery flavour and a bit of bitterness as well.

Olive Oil is Made Out of Fruit Instead of Seed

A mechanical pressing of ripe olive fruit is used to produce olive oil and is made from fruit, unlike most oil, instead of from seed.

The Enemy is Heat, Light, and Oxygen

Olive oil is best stored in a dark, cool place away from heat and light, which will speed oxidation up, which causes the oil to turn rancid more quickly.

The Most Olive Oil is Produced By Spain

It is Safe to Use Cloudy Olive Oils

There are many reasons why olive oil may appear cloudy including being an unfiltered olive oil (means just that the pulp and sediment have not been removed) to chilling it (when olive oil is cold is can have a cloudy appearance). Unfiltered olive oil contains sediment that is just pieces of oil that provide the oil with added flavour.

You Can Use Olive Oil to Fry With

A majority of people warn about olive oil’s lower smoke point compared to corn or peanut oil, which are used more often for frying. After oil reaches its smoke point and may release toxic compounds that should not be consumed. Refined olive oil has a 486 degree F smoke point, which makes it well-suited for deep frying – but we do not recommend that you use extra-virgin olive oil, which does have a lower smoke point.

The global COVID-19 (Coronavirus) pandemic has been both advantageous and disadvantageous for the many corporations operating within the Milking Machine sector. Research published regarding the … END_OF_DOCUMENT_TOKEN_TO_BE_REPLACED

Bioconjugation: What Is It? It is a chemical technique that’s used to couple two different molecules together with one being a biomolecule like a protein, carbohydrate, or nucleic acid. Of these, … END_OF_DOCUMENT_TOKEN_TO_BE_REPLACED